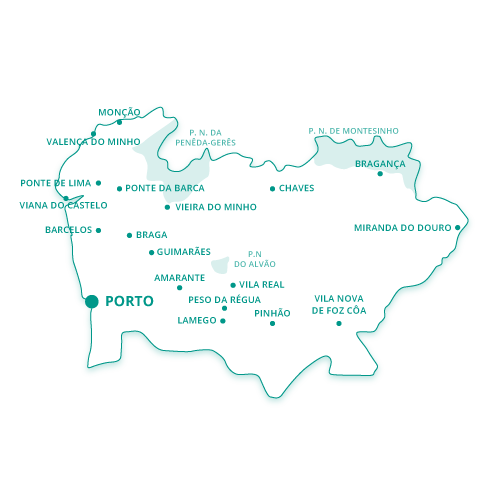 This region includes the Douro Valley and part of the mountainous areas surrounding it and can be divided into two major zones. Firstly, there is the coastal area, which includes the Porto Metropolitan Area and all its satellite cities and the Minho, the greenest area in Portugal, where rainfall is high and natural sanctuaries such as the Peneda-Gerês National Park can be found in the mountains.

The other area, through which the River Douro runs, bristles with mountain ranges and is called Trás-os-Montes (literally, “behind or beyond the mountains”). It starts in the city of Vila Real and extends northwards and eastwards as far as Spain. It is a rugged area where nature is relatively wild, yet in the northern interior there is also something of the Upper Alentejo region, where the sparse trees, olive plantations and almond trees give it a Mediterranean feel.

One of the most famous wines in the world has, for centuries, been produced in the Douro valley. The vines are grown in terraces cut into the rocky schist and granite slopes where machinery cannot reach and they can only be tended by hand, as has been the practice for generations. The River Douro cuts deep into the landscape and it is not unusual to find high plains followed by ravines where the river below plunges onwards towards the sea. This region is also the birthplace of the Portuguese national identity and the area where the Condado Portucalense (the origin of the kingdom of Portugal) was established. It therefore features strongly in the national imagination and many legends and tales associated with its fountains, churches and ruins survive to this day. The name “Portugal”, of course, comes from Porto.