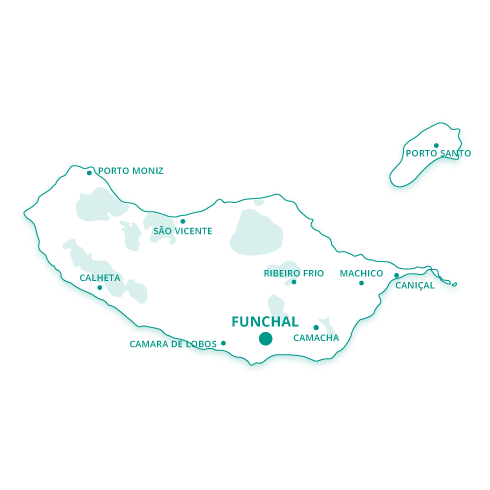 The archipelago of Madeira is located in the North Atlantic, near the Canary Islands (Spain) off the coast of West Africa. It has a temperate subtropical climate with local microclimates that result in impressive diversity. While it is near to sea level, the number of optimal days in this set of islands is very high. The archipelago is made up of a large island, also called Madeira, and another, rather smaller one called Porto Santo, as well as various uninhabited islets.

The main island’s shape is approximately that of a bean pod with its convex side turned to the south, which is where the archipelago’s capital, Funchal, with a population of some 110,000, is to be found. Madeira has volcanic origins and mountain peaks of more than 1,800 metres – of which the two best known are Pico Ruivo and Pico do Areeiro – so creating a very dramatic landscape. The island was uninhabited until its colonisation by Portugal in 1424. Its name, which means “Wood” comes from the fact that it was completely covered by laurissilva or laurel forest when it was discovered. However, most of the island is today covered by species introduced in the last 500 years by Madeirans, such as sugar cane, fruit trees such as banana, pineapple and papaya, and vines from which Madeira’s famous fortified wine is made. There are various other fruit trees, such as chestnuts, pines, eucalyptus and other species.

The archipelago is nowadays a travel destination for people from around the world and is a little over one hour by plane from Lisbon.

WISH TO VISIT THE MADEIRA ISLANDS?